Scientist believe that if each human could plant six trees, global warming would be a thing of the past. Many human settlements have a rich cultural heritage which connect to nature through their namesakes. The Namesake Project proposes re-planting the trees and forests that lend their names to many parts of the peopled world.

A long time in the making, Italian Beach started in 2014 when I was an artist in residence at Mason Vert a fabulous artist residency in the town of Marnay Sur Seine, which is in the Champagne-Ardenne region of France off of an old Roman road that stretches between Paris and the city of Troyes. While there, I would take long walks along the bank of the Seine as it twisted through ancient farmland and deserted patches of bramble. One evening I chanced to see a family of twenty or so wild boar traveling along the deserted bank of the river, on the the far side, at dusk. One of the small piglets, bringing up the rear, actually stopped to roll in an inviting patch of mud, before jumping up to run after its family.

The next morning, I had the pleasure of joining the mayor of Marnay and the director of the botanical garden for coffee. Both were in their sixties, had lived in the area all thier lives, and were startled to learn that wild boar were living along the banks of the river. When I described the spot where I spotted the group, the mayor mentioned to that this would have been at “Italian Beach.” Almost in passing, I asked if the place had been named that because Italian immigrants had been living there. They laughed at me and said no. They explained that once upon a time, a long time ago, there had been an immense, ancient Italian Poplar growing on that spot of the bank. They both  remembered seeing when they were very young children and recalled that you could see it from a great distance and that it dominated the rolling plane of farmlands that stretched out from both sides of the river. Neither of them knew the origins of the tree, who planted it, or how old it was. One of them remarked that they didn’t know when the tree actually disappeared, but that  most people in the area probably wouldn’t know why that deserted turn of the river was referred to by that name.

Something about this brief interaction gave me pause. I didn’t know if it was that this marker in the landscape, had almost completely disappeared save for its linguistic wake, but I felt like, somehow, I wanted to hold on to this tree before it was completely gone. I was also thrilled by the idea that this very old tree had outlived it own origin story. The few people alive who remembered it were only able to testify it its final days and the namesake of this bend in the river had almost entirely passed from the institutional memory of the village.

This past summer I returned to Marnay-Sur-Seine, to research and work on Italian Beach; the Namesake Project. While there I din’t see any more boar but I did meet the probable decedents of my immigrant tree. It turns out the at Italian Poplar, also called the Lombardy Poplar, was the rage in Europe in the late 1700. Attaining heights of 120 feet and fast growing, these trees were used as wind blocks and were planted on both sides of roads in long stretches, creating formal cannons in which to travel between communities. They were even used to demarcate the grave of Jean-Jaques Rousseau at Ermenonville, France. Forming one of Europes most famous tree plantings, the tableau was often imitated.

They were even famously used to demarcate the grave of Jean-Jaques Rousseau at Ermenonville, France. Forming one of Europes most famous tree plantings, the tableau was often imitated in other plantings

“Lombardy poplar presents a striking form in the landscape.

The Lombardy w a s disseminated through-out Europe in the mid-eighteenth century fromItaly, where it was found growing on the banks of the Po River in Lombardy.”

While in Marnay this visit, I paired with the Jardan Botanique to harvest, trim and start a crop of 12 Lombardy Poplars. After harvesting young stocks of the tree from an stand on a nearby estate, I soaked the ends of the the saplings in the river for six week. At the end of this incubation period we planted, with the approval of the local municipality, six of these saplings next to the river. I was only in Marnay for a few days after planting, but the community promised that they would continue to water the trees.

Research in the field of cognitive psychology tells us that the best way for humans to adopt a new behavior is to tie it to a ritual that we already practice. I am proposing this community artwork on a global scale. Each nation on earth celebrates their day of national origin with a holiday. In the US this day is the Forth of July. In France this celebration is marked by Bastille Day. Wouldn’t it be wonderful if we marked our connection to these celebrations with planting one, or six, Namesake tress?

I kinit sweaters for plants, I culture lichen on the sides of skyscrapers in New York City and I manufacture alternative forms of housing for hermit crabs, out of plastic. With the engineer Dr. Qingze Zou, I am currently creating the IndaPlant Project: An Act of Trans-Species Giving in which I am building light-sencing robotic supports for housplants. These moving floraborgs allow potted-plants to roam freely in a domestic environment, in search of sunlight and water.
View all posts by demaray → 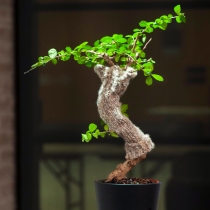 Sweaters for Plants, FloraBorgs and the Songs We Sing at AESS

I am a sculptor who is interested in my culture’s interactions with the natural world. The pieces that I make often concern the concept of a biotope—small environments that are shared by multiple species, including humans. This work may also

Sweaters for Plants, FloraBorgs and the Songs We Sing at AESS

I am a sculptor who is interested in my culture’s interactions with the natural world. The pieces that I make often concern the concept of a biotope—small environments that are shared by multiple species, including humans. This work may also

The IndaPlant Project: An Act Of Trans-Species Giving—originally beginning as a collaboration between the myself and the engineer Dr. Qingze Zou—is designed to facilitate the free movement and metabolic function of ordinary houseplants. In this effort, we have have successfully

The IndaPlant Project: An Act Of Trans-Species Giving—originally beginning as a collaboration between the myself and the engineer Dr. Qingze Zou—is designed to facilitate the free movement and metabolic function of ordinary houseplants. In this effort, we have have successfully